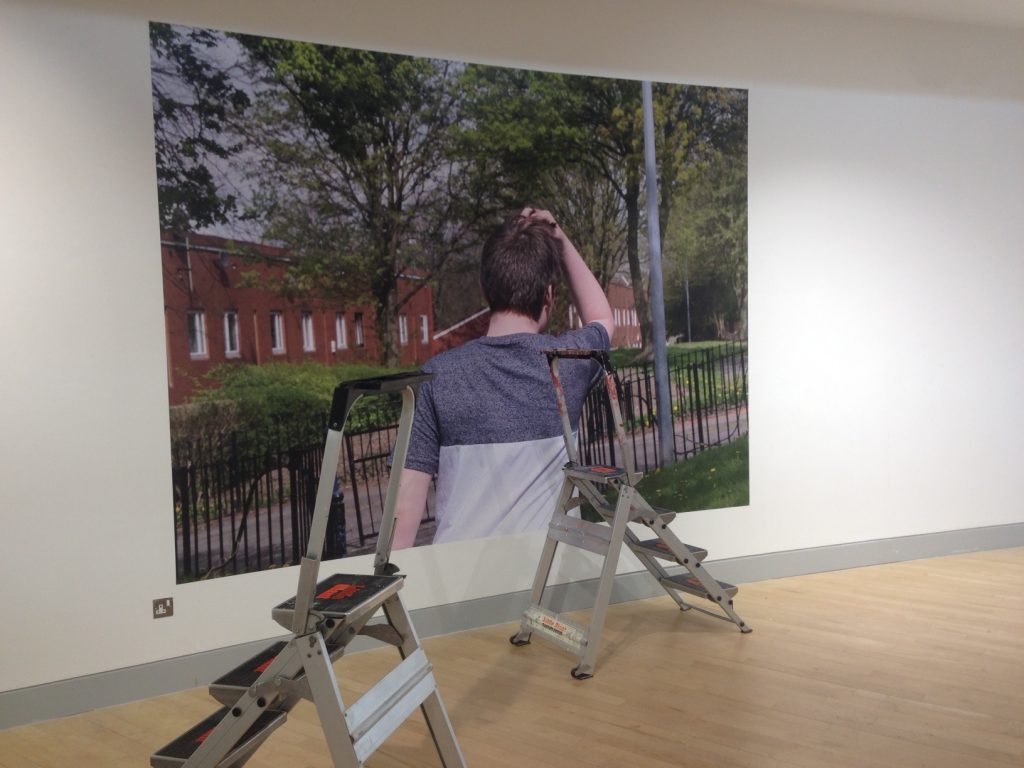 Between November 2016 and September 2017 Gary Bratchford and Robert Parkinson undertook an onsite residency in Halton, Liverpool, as part of the Open Eye Cultural Shifts project. During this 10-month period they worked with two distinct and pre-determined groups; The Women of Windmill Hill in Runcorn and the Widnes Vikings Golden Generation Group. The Golden Generation group had come together through their passion of rugby, and a determination to stay healthy, active, social citizens. Across the Silver Jubilee Bridge into Runcorn, The Women of Windmill Hill are residents of the aforementioned estate, which is part of the 1970s new town projects, and a contested space.

Working with both groups independent of one another, the artists, explored visual communication and collaborative working as a process rather than a means to an end. In doing so, they wanted to use art practices as a tool to facilitate and develop wellbeing in the broadest sense. They were not preoccupied with aesthetics, but how art practice, including photography, writing, film in addition to social activities such as going for walks or simply having a group conversation, could foster and/or probe a multitude of social issues.

Gary and Robert asked me to write a foreword for the book which encapsulates this multi-layered project, shared here:

In 1986 Stevie Bezencenet wrote the “skills which are necessary to community projects using photography are not only visual ones – the production of the image may be only part of the process, which may involve collective debate and authorship (not easy), research and writing, design and layout processes, organisation and campaigning, and always, a consideration of the audience and how they will be able to inter-relate with the work.”

The UK has a rich history of community-based photographic practices, growing out of a rejection of traditional conventions which prioritise outside–authors telling communities stories (ostensibly to benefit those photographed, through the exposure of their day-to-day existence to a generic, but sympathetic, audience). This rejection came hand-in-hand with practitioners embracing the idea that the more tangible act of personal expression, developed through the acquisition of technical and aesthetic skills, contributes to the development of social and political sensibilities within the community in which images are made. Presciently, this ideal of personal as political is still central to contemporary socially engaged photographic practices like the projects which have been initiated by the resident artists of the Culture Shift programme. But here, in Gary Bratchford and Robert Parkinson’s work with two different communities, that ideal is taken to a logical culmination: photography as wellbeing.

This idea of a photoproject as wellbeing is reminiscent of feminist photo practitioners like Jo Spence, who modeled photography as therapy throughout the 1980s. Indeed, community-based photographic practices emerged as feminist art-making was made increasingly popular by women artists who politicised the personal, relocating the domestic into the public domain. While it is perhaps difficult to establish a metric by which to measure project contribution to wellbeing, The Women of Windmill Hill certainly embodied feminist ideals of using photography to explore the personal. It was them who saw potential beyond the proposed parameters outlined by Gary and Robert in the induction to the project, rewriting it to meet their own interests and needs. In this they activated an archive, including images they had already made together as well as old promotional material for the estate, photographed prolifically, and envisioned producing diverse publications for public distribution, in addition to the exhibition they shared with the other group––elevating their own domesticity onto the walls of the art institution. And, without conflating women’s photography solely with the domestic sphere, this group has made poetic images of their own spaces and places––gentle landscapes, flowers, plants, and the interiors of home feature in their work.

Their gentle images perhaps belie the complexity of this way of working. As Bezencenet outlines, the act of a photographer working with community to make their own representations is a significantly more layered practice than that of simply dropping in to photograph a community, and sharing the images elsewhere. This practice relocates the artist to a role which is far more expansive and complicated, but forefronting collaboration also requires more of the participant (as Gary notes within this book, socially engaged work needs wilful participation). Though socially engaged art practices are contemporarily popular, this relocation of subject to participant does not always account for capacity, nor interest. And in their own way, the Widnes Vikings Golden Generation Group turned this contemporary social turn on its head. There is a sense of delight and enthusiasm in their images, which are more snapshot–portrait than strict documentation––but these participants may have prefered to be subject, rather than maker. The artists marked that oversight as a failure on their part, but small discoveries like these are crucial to mapping the contemporary terrain of this practice, which needs to be far less generic than a direct shift of authorship from photographer to subject.

In focusing on wellbeing, Gary and Robert relegated aesthetic refinement as less crucial than the ameliorative effects of self-determined making. And while this is typical of socially engaged projects which prioritise non-object outcomes, the increasing sophistication of societal visual language makes it tricky for these projects to compete with other sorts of images made under a broad documentary banner (the photographic genre to which they are perhaps most closely aligned). It takes clear intentionality and careful contextualisation to transcend the idea that the photograph must be spectacular in order to truly express the ‘needs’ of its subjects. Thirty years ago Bezencenet also wrote that these community photography projects had the capacity to achieve self-determination and social emancipation, and while the photographs made by these two groups are not sensational portrayals of age, to ask that of them is to ignore that the photographs are perhaps far less important than the kinds of relationships that have been formed. Handing over the camera may be sacrifice, but here this is resounding success: these subject-turned-makers are not shown as lonely old people, but as part of an extended community coming together to choose how they will share themselves with their viewing audience. And if anything models photography as wellbeing, that does.

The book is being being launched at Culture Shifts: Local, a new exhibition of collaboratively produced photography from eight socially engaged projects across Liverpool on 5 October at 17:30–20:00 at Open Eye Gallery, 19 Mann Island, L3 1BP Liverpool.  See here for more information.