PROVE IT TO ME 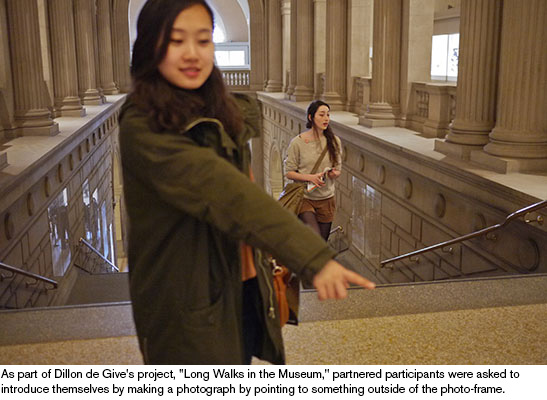 PROVE IT TO ME, curated by Natasha Marie Llorens, is a group show featuring the work of Shane Aslan Selzer, Stephanie Diamond, Dillon de Give, Mark Menjivar, Maria D. Rapicavoli, Julia Sherman, and Mary Walling Blackburn. These seven artists, loosely defined as making social practice artwork, refuse an objective understanding of photography. Instead, they create projects that thicken the relationship between an image and the event it stands in for.

Arguably the only thing that holds social practice art together as a genre is the fact that it takes place between people. It is an art-form that entails giving over meaning to subjects—to bodies—in all their impossible contradictions. While such projects are, as a result, incredibly complex matrices of intention and accident, they are often presented in exhibitions with still images that seem to claim: “Here is what happened. Here is a picture of the relation that is the artwork. Here is the proof that the we related to one another.” – Natasha Marie Llorens

This thickening takes a number of forms: Three of the projects use photography as a way of binding the group, showing how much groups depend on representation for their coherence. Shane Aslan Selzer’s What We Care For (an FSU Community Garden) documents an Instagram archive generated by staff and students from Florida State University of their office plants—tiny public monuments around which to socialize. For three years Mark Menjivar traveled around the country exploring food issues. You Are What You Eat is a series of portraits he made of the interiors of refrigerators in homes across the United States over the course of his research. For PROVE IT TO ME, Mark will also organize a community food mapping workshop. Lara Gallagher and Julia Sherman hosted a workshop at The Hudson Guild Community Center in New York City for several months. Senior members gathered on a weekly basis to re-enact the pilot episode of the hit TV show The Golden Girls. Their video The Girls is one result of these sessions.

Two projects try to map the complex relationship between the photograph, its subject, the photographer, and the viewer. They reach below the surface of the image to the relationships between these positions that produce it. Maria Rapicavoli’s photographs show a group of people who had gathered to picnic, in Eastbourne on the South coast of England, but who instead found themselves witness to the search for an unconfirmed suicide attempt. Stephanie Diamond’s project assumes that objects, over time, come to be imbedded with emotional experience, and that these layers can be read given enough attention. In this line, she will offer psychometric readings of visitor’s photographs on the opening night.

For Mary Walling Blackburn and Dillon de Give, the documentation of social practice touches on the genre’s basic assumptions about what an image of an encounter between people can capture when so often the conventions of reception are constructed in advance – through language, culture, familiarity with the discourse of art, or classed identity. Dillon de Give’s Comprensión de mi Colección de Chistes is a series of short videos, “images of a person trying to make another person understand something.” They show de Give listening to jokes in a language that is not his own told by people he does not know. Mary Walling Blackburn presents six proposals—written and drawn, recto-verso—for social practice projects which do not obscure their classed connotations, whose antagonism is unchecked by polite convention (or law).