Artificial Hells; Participatory Art and the Politics of Spectatorship 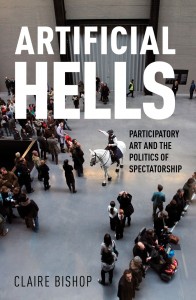 I’ve just started reading Artificial Hells: Participatory Art and the Politics of Spectatorship 1 properly (having only ever browsed it in snatches and grabs before now). It is “the first historical and theoretical overview of socially engaged participatory art,” written by Claire Bishop, who is Professor in the PhD program in Art History at the CUNY Graduate Center in New York. The framework sets up to challenge the political and aesthetic ambitions of participatory art. Bishop’s writings err on the terrifying side of clever and I am already enraptured (and by terrifying I mean terribly articulate and furiously intimidating all at once).

I am sure there are many things to reflect on (I really am only into the introduction) but I really like how she frames the limitations of the image to capture the layers and nuance of socially engaged art. Of course, this rather handily supports my conjecture that socially engaged art can be rather difficult to share with any audience secondary to its making (particularly when the onus is on the experience and not the record), and that documentary photography is rather terrible at expanding the process by which it gathers its material––thus making the most interesting place to be making photographs somewhere in the amoebic swamp between these two rather distinct oeuvres. Anyway, this is rather a hefty quote, but I think it is worth a gander.

“One thing is clear: visual analyses fall short when confronted with the documentary material through which we are given to understand many of these practices. To grasp participatory art from images alone is almost impossible: casual photographs of people talking, eating, attending a workshop or screening or seminar tell us very little, almost nothing, about the concept and context of a given project. They rarely provide more than fragmentary evidence, and convey nothing of the affective dynamic 2 that propels artists to make these projects and people to participate in them. To what extent is this a new problem? Some of the best conceptual and and performance art in the 1960s and ’70s similarly sough to refute the commodity-object in favour of an elusive experience. Yet visuality always remained important to this task; however ‘deskilled’ or desubjectivised conceptual and performance nevertheless managed to prompt a wide range of affective responses, and their photo-documentation is capable of provoking deadpan amusement, wry embarrassment, iconic reverence, or appalled disgust. 3 By contrast, today’s participatory art is often at pains to emphasise process over a definitive image, concept or object. It tends to value what is invisible: a group dynamic, a social situation, a change of energy, a raised consciousness.”   4

I love the term “affective dynamic” which ties into the idea I have talked about previously of an image having a kind of charismatic agency (a concept I borrowed from the ‘other’ Claire––Doherty). She goes on (and this is just in the introduction) to talk about the ‘mediating image’ as a necessary link between the artist and the secondary audience (you, I and everyone who didn’t participate) 5 and the need to move beyond visuality as the sole way to analyse art, and the simultaneous necessity of form as a crucial vessel for communicating meaning 6. Like I said, it is already thought-provoking and I am going to keep wading through to see if some of the observations she has made about these tensions are offered any ‘solutions’. If you want to read it for yourself, (and it is certainly worth a read) you can find it here.