Photography As Dialogue brings together writing, projects, research and a film that explore how communities, researchers and artists are using photography to carve out and open up spaces for conversations. This special issue of the academic journal Photography & Culture, edited by Tiffany Fairey and Liz Orton, explores the dialogical potential and limits of photography. It brings together an eclectic range of projects from around the world that demonstrate the plural ways that photography can open up reflexive spaces in which dialogue thrives while also acknowledging how photography can act to close down conversation. How is it that images and image-making serve to facilitate, catalyse and obscure dialogue? What is particular about the talk that happens through and with images?

Please note anyone who does not have access to academic journals can request copies of the articles from the authors or editors. 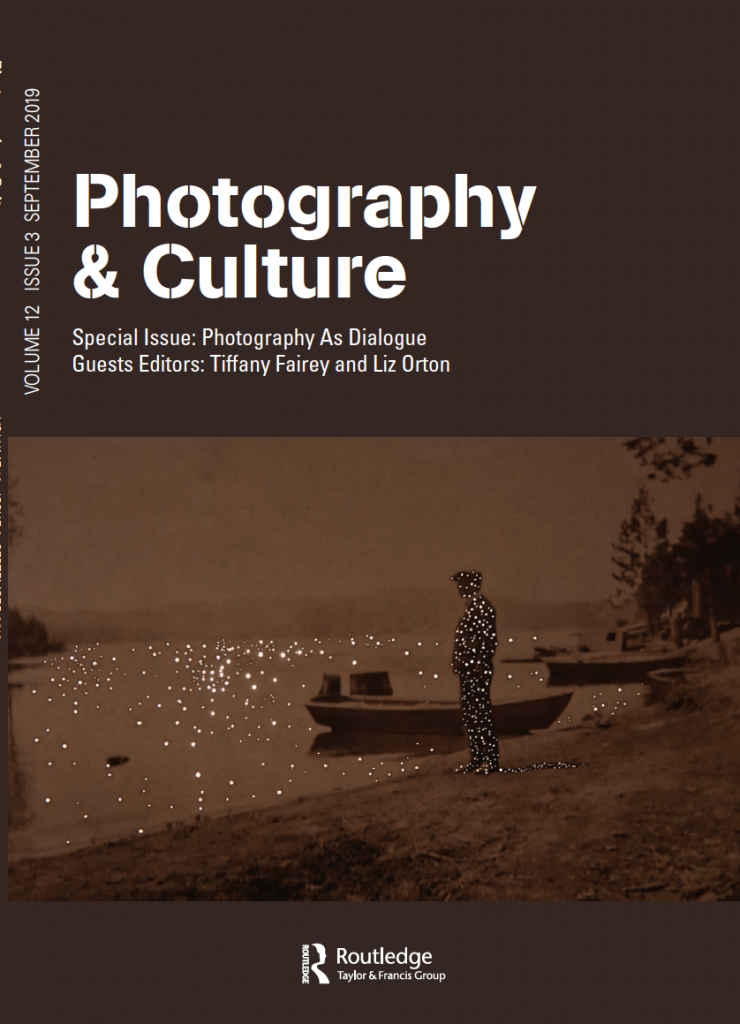 In their intro, Photography As Dialogue, Fairey and Orton reflect on questions around the dialogical potential of photography that arose over the course of their 10 year project, in which they have sent over 260 images back and forth to each other. Drawing on dialogue theory, they argue that if photography is understood as a ‘certain form of human being-with-others in which the camera or photography are implicated’ (Azoulay 2012:18) then it is important to explore the parameters of what constitutes a meaningful form of photography as dialogue. Who is visible, who is speaking and what shapes participation in the dialogue? Is it essential that those involved share a common visual vocabulary? Or do we need to expand our notion of what photography consists of, thinking beyond visual semiotics, to its embodied practice as a collaborative and applied practice to understand its dialogical potential? Thinking about photography as a form of dialogue pushes us to explore the relations that extend out from the image. And it speaks to a hope that creating images together, looking at images together and talking about images together will help us to understand, see and co-exist better. 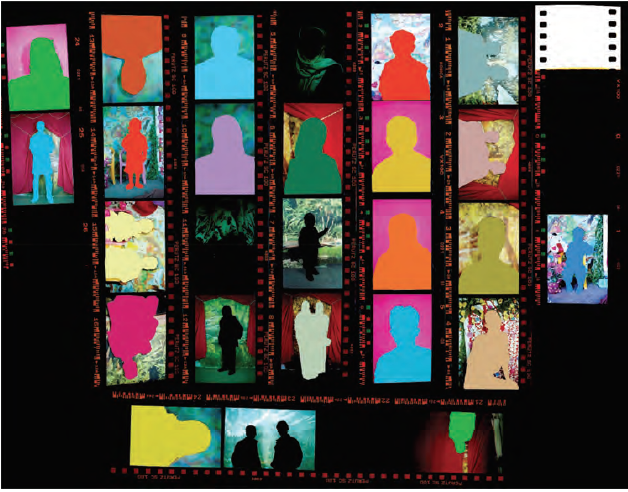 Yasmine Eid-Sabbagh. From Plot/Future 6, intervention day 7: The Ones Who Walk Away…, part of the series of Interventions into the annotated history of the Arab Image Foundation at the MACBA from June 8th-14th, 2017.

Yasmine Eid-Sabbagh’s article reflects on over a decade of conversations with people and their photographs in Burj al-Shamali, a Palestinian refugee camp in Lebanon. She describes an extended process of gathering images from people in the camps for a digital depository that has sought to accommodate people’s plural motives for collecting photographs, and to unfold the oppressed histories in which they and their images are implicated. Eid-Sabbagh argues we need to extend our conception of the photograph to re-imagine it as composed of multiple meta-medial layers and to make the dialogue between these layers visible. 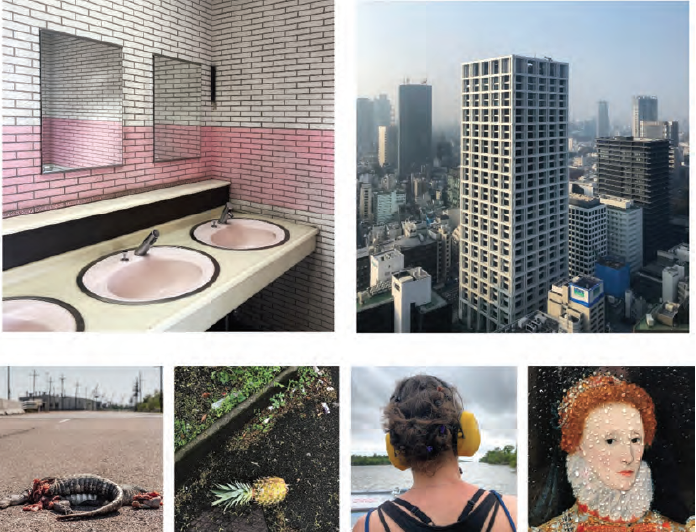 David Campany and Anastasia Samoylova, from Dialogue (2017–). Courtesy of the artists.

Corresponding Associations: the Poetics and Limits of Photography As Dialogue by Daniel Palmer

Daniel Palmer’s article discusses artist-led photo dialogue projects in which they have sent images back and forth to each other, via Instagram, email or phones. He probes the parameters of the shared visual language in such projects, locating their emergence out of networked digital photography which has seen photography shift from being primarily about memory to a more ‘conversational’ mode of social communication. Artist-led photo-dialogues are both a response to a potential, Palmer writes, and an attempt to develop a new form of exchange. 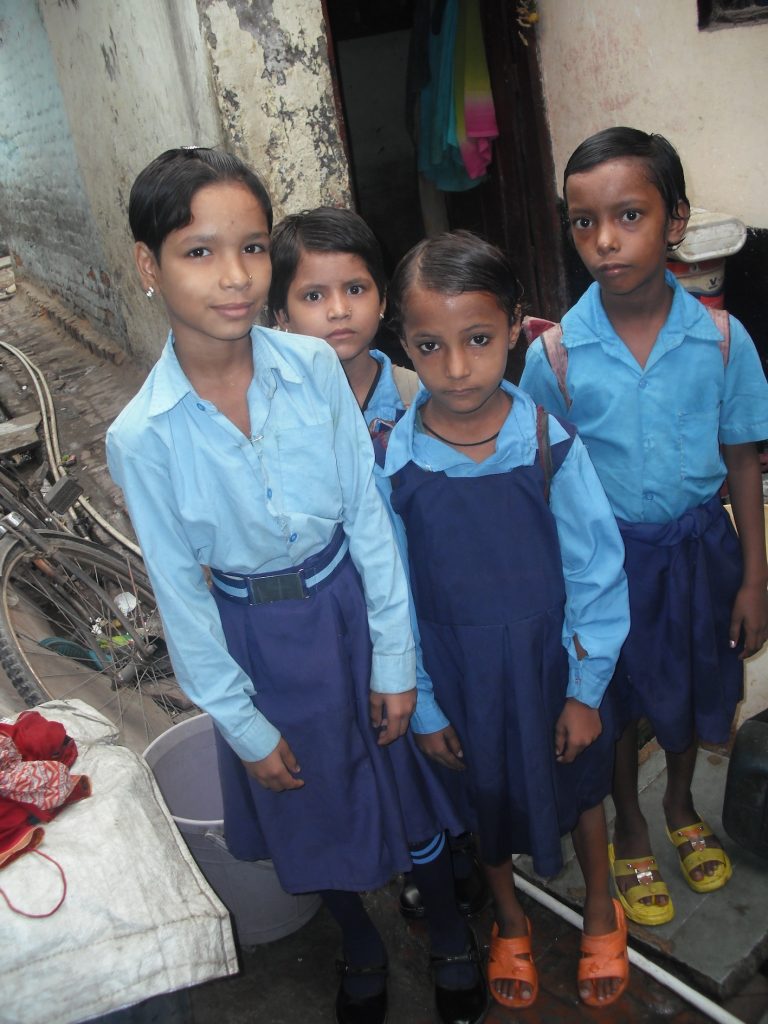 “This photo is of school going children. They are dressed well and on their way to school. We see here that the children are wearing good clothes and how happy they are to go to school. I want to show this picture so that people see that even in this poverty people send their children to school so that they are educated and successful.” Photograph and caption by female research participant, in Sanjay Colony, Delhi, India, Depicting Injustice (Miskelly & Warrington 2010)

Who Gets to Talk About NGO Images of Global Poverty? Edward Ademolu and Siobhan Warrington in conversation.

Siobhan Warrington and Edward Ademolu’s In Conversation speaks to the paradoxical potential of the image to both shut down and open up plural perspectives. They converse around a shared concern for which voices are being heard (and listened to) in debates around NGO image-making. Re-positioning diaspora audiences and the subjects of NGO images as active contributors to and actors within the image-making process, their research projects both raise the question of whose interests these NGO images serve? As social science researchers Warrington and Ademolu employ photo-elicitation, using images directly with research participants to generate conversations around representation. While their research highlights photography’s capacity to mis-represent and perpetuate racial stereotypes, their methods harness the photograph’s potential to open up new spaces, prompt critical reflection and ‘speak back’ to the images and image-makers. 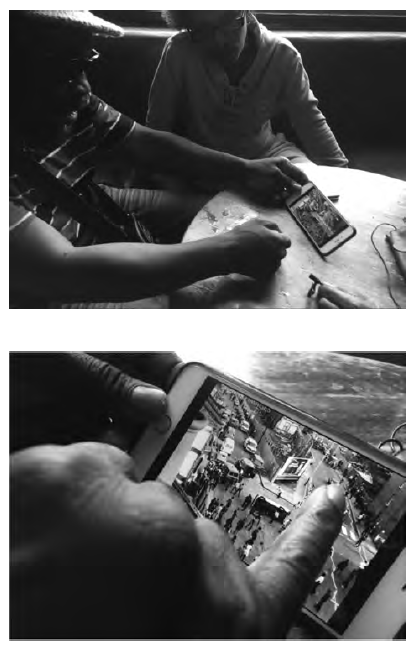 Sireita Mullings’ article discusses Voices from the Front Line, a project that saw young people from Lambeth using photography to uncover the social, cultural and political heritage of Brixton’s Railton Road. Railton Road is an important gathering place for South London’s Caribbean community that became famous as the street where the Brixton social uprisings of the eighties began, and now a site of rapid gentrification. Mulling’s descriptions of the encounters and conversations that emerged around making photographs and looking at photos provides an evocative illustrations of how photography, as a catalyst for memory and making connections, facilitated the young people to explore and uncover aspects of Black British cultural and political history not taught in school. 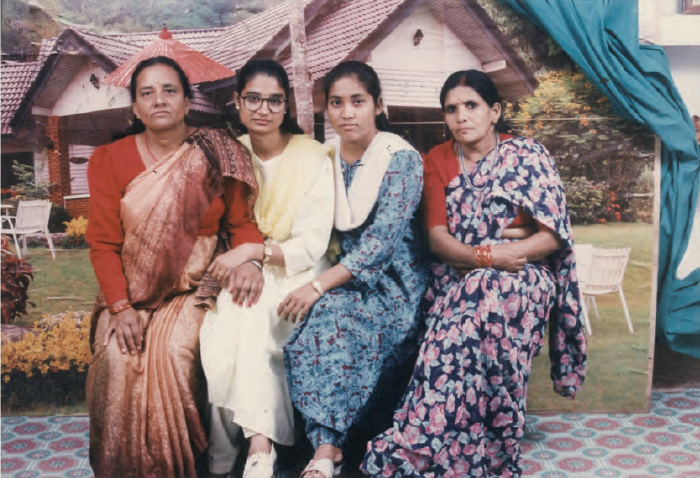 Palpa | 1990
At a March 8 Women’s Day rally, just weeks before the pro-democracy popular movement of 1990, Kavita Poudel, Yamuna Ghimire, Dil Maya BK, and Maiyya Bhattarai, along with other friends not seen here, were picked up by the police from Butwal for chanting anti-Panchayat slogans and put in prison in Tansen. On the day they were released, they went to a photo studio and had this group portrait taken.
Rambha Poudel Collection/Nepal Picture Library

NayanTara Gurung Kakshapati and Kelly Hussey-Smith describe Nepal Picture Library’s recent Feminist Memory Project and its work to uncover obscured stories of women. In their view, the incompleteness of the archive and its failure to hitherto record these stories, is not so much a deficiency as an opportunity for dialogue. NPL’s collection is built through citizen contributions and dialogic participation where archive managers engage in extended conversations about the images through interviews, workshops, exhibitions and collaborations with researchers and curators. The purpose is to create a ‘visually dense’ version of Nepali history for and crucially with public audiences. 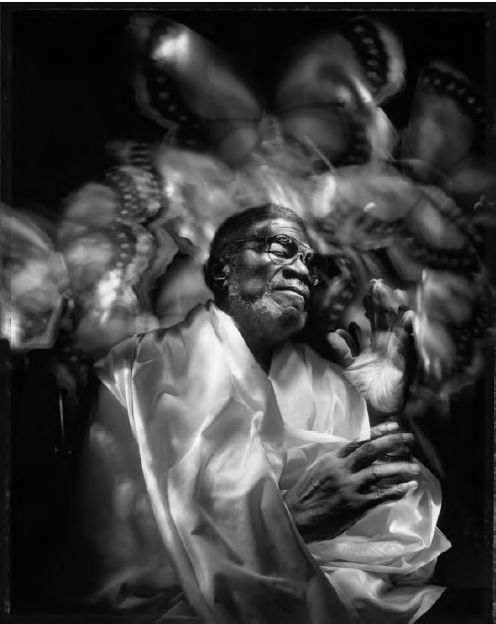 The Seeing With Photography Collective evoke a form of dialogical photography in which subjectivities become interwoven in a shared compulsion to create images that convey the visions of those that see, but not with their eyes. The group of visually impaired, sighted and totally blind photographers from New York City have been working together for 20 years and have developed a process that is both highly intuitive and technical. With the camera shutter left open for minutes at a time, in darkened rooms they use torches to improvise scenes creating images that are their own form of magical realism: dream-like, disorientating and iridescent. The blind photographers, with varying levels of visibility, know their photographs through the descriptions of those that can see them. This is a slow and deliberate form of photography determined to overcome the limitations of the visual and to expand our notions both of photography and of what it means to see. 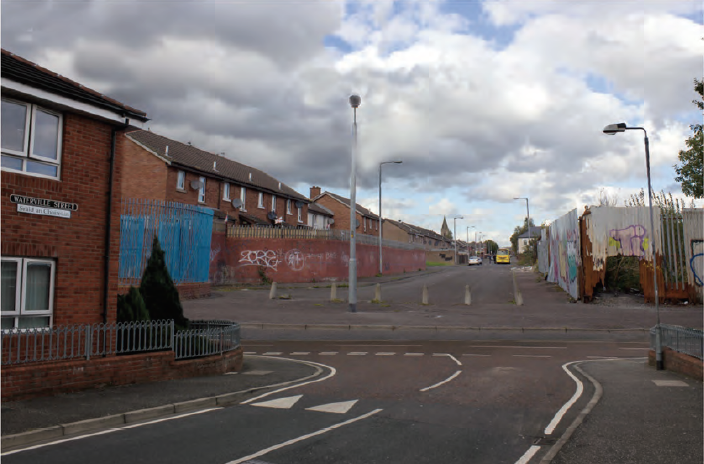 Established during The Troubles, Belfast Exposed has worked for 30 years to catalyse conversations that build relations and support the peace process. Tiffany Fairey considers an image, created in one of Belfast Exposed community projects, in which young people have digitally removed one of Belfast’s biggest peace walls that they live alongside. In doing so they visualise something that does not yet exist in Belfast: the unsegregated landscape of a city without walls. The leading peace theorist, John Paul Lederach, argues that change happens when people ‘language themselves’ into new realities through conversations and stories that spark the moral imagination. These young people demonstrate how photography has a role to play as they work to create images that ‘envision themselves’ into new landscapes. 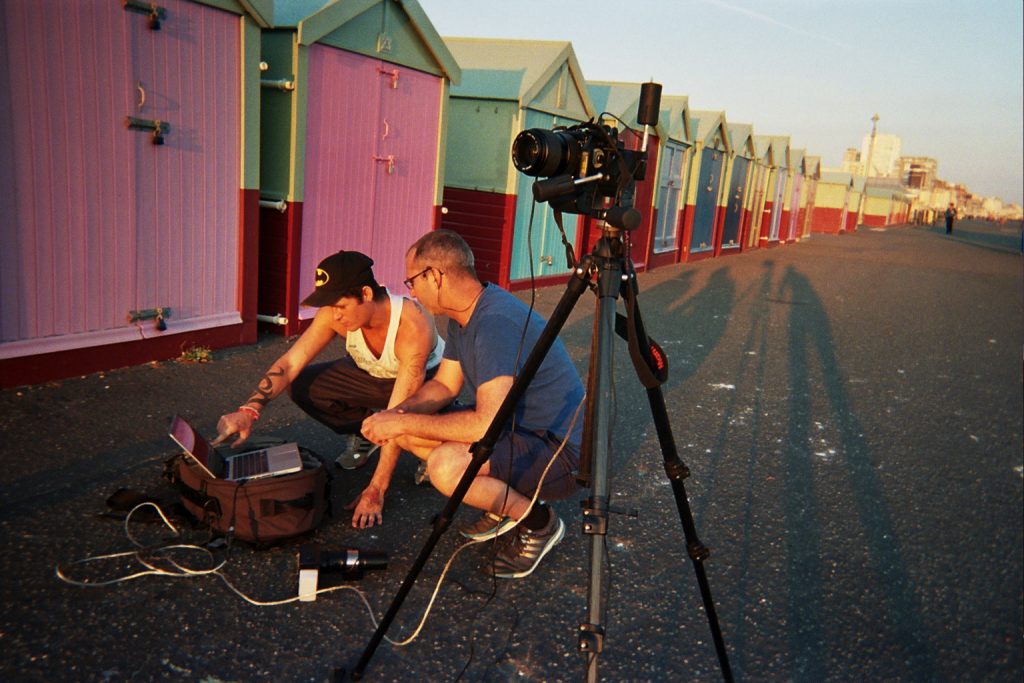 What We Don’t Talk About When We Talk About Photography and Participation. Ben Burbridge and Anthony Luvera in conversation.

Anthony Luvera and Benedict Burbridge’s conversation expands the critical discussion around socially engaged arts by focusing on funding and commissioning practices. At its core a discussion about power and who benefits, Luvera and Burbridge wonder why conversations about financing are excluded from the narratives around such projects? Luvera describes the delicate institutional and community relationships that artists navigate when undertaking socially engaged work. For Burbridge, that these processes are often silenced in the final viewing experience points to telling power relations. They remind us that despite claims to challenge hierarchies, such projects often only do this in prescribed ways and at certain stages. 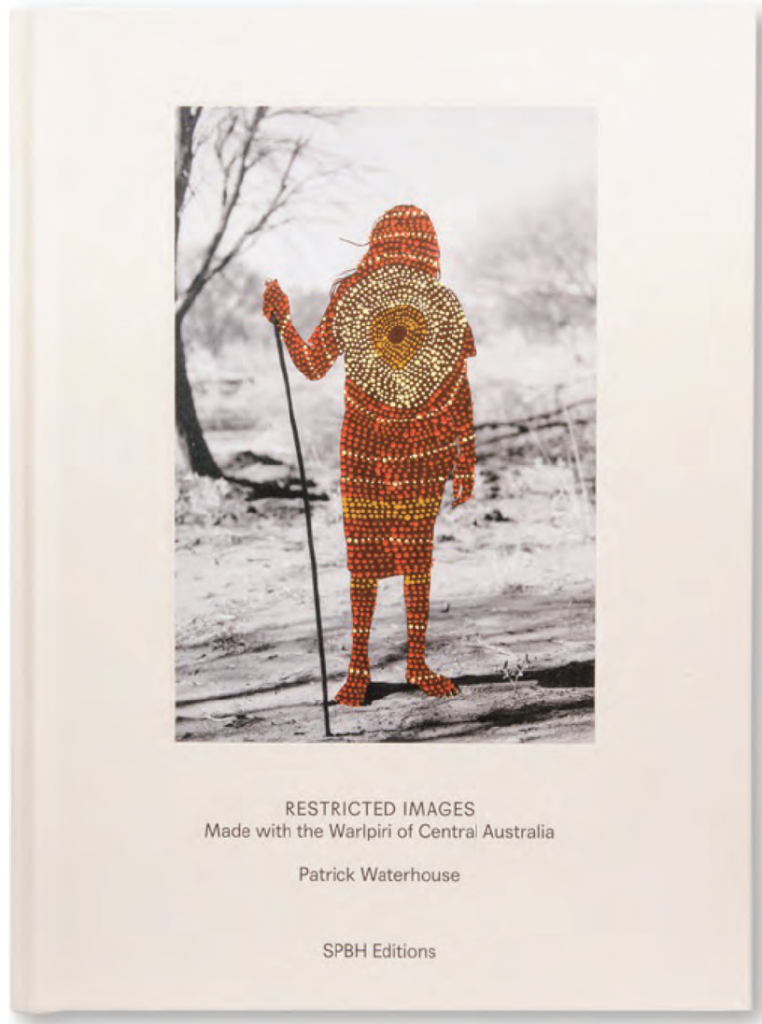 Gemma-Rose Turnbull reviews Patrick Waterhouse’s book, Restricted Images, that uses collaborative photography to re-negotiate the history of the colonial and culturally invasive representation of Aboriginal people and places. Inviting Aboriginal artists to “restrict and amend” his photographs (images which he had made of them) with their painting (dot patterns that are elements of traditional storytelling), Waterhouse proposes to symbolically return agency over their images to Aboriginal communities. The resulting images are captivating but Turnbull points out that insufficient detail about the image-making process is provided to evaluate how much agency the Aboriginal artists have had. 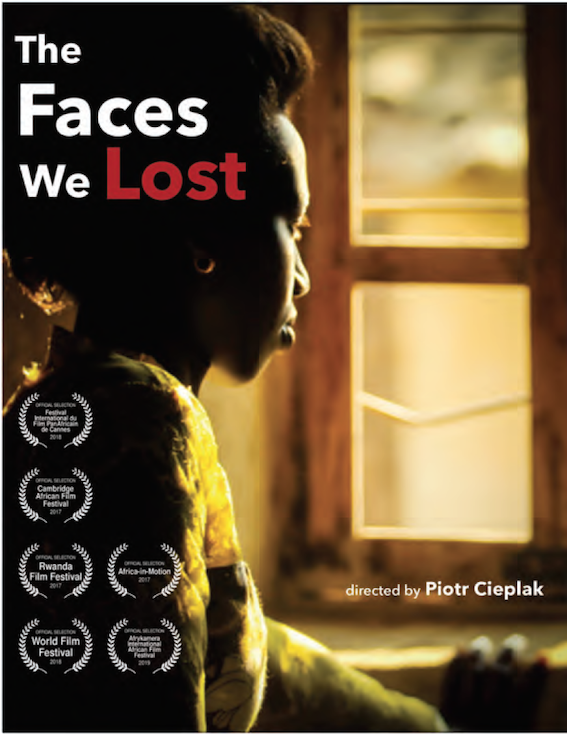 The Faces We Lost. Directed by Pitor Cieplak. 2017. Film.

Film Review: The Faces We Lost. Directed by Pitor Cieplak. 2017. By Zoe Norridge

Zoe Norridge reviews Piotr Cieplak’s documentary, The Faces We Lost, in which he talks with Rwandans, survivors of the 1994 genocide, about the photographs they do and do not have, of their loved ones. Norridge writes that family photos of those who were killed play an essential role in commemoration and grieving in Rwanda. Over various interviews the film gently explores how people remember, both with and without photographs. Recognising that his academic research and analysis ‘can offer nothing’ to those who suffered the genocide, Norridge affirms how Cieplak’s film reveals how people, in dialogue with their images and memories, live with loss and atrocity.