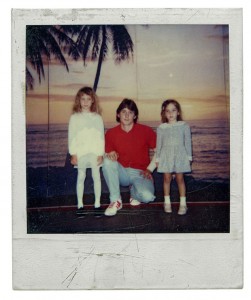 It is often when institutions clamp down hardest, when transparency is most limited and the freedom of photography most suppressed, that images, like water held between hands, find their way into the public to to reveal complex, human, and generative truths.

Alyse Emdur’s ongoing project, Prison Landscapes, sources images from visiting rooms of United States prisons to offer a rare and powerful window into the world of incarceration. The project pairs portraits of inmates in front of prisoner-painted backdrops (photos that were sent to her through years of correspondence) with images she took within various prisons, revealing the stark contrast between these bucolic scenes and the corresponding prison interiors. The tension between the two elements presents a complex reading of photography’s power to both maintain and escape physical and psychological limits in life. Blurring lines of anthropology, folk-archiving, collaboration, and fine-art photography, the project creates a dynamic and engaging space for prisoners to represent themselves through text and image.

The inspiration behind the project dates back to 2005 when Emdur, looking through a family album, found a photograph of her (at age 5) visiting her brother in a state prison. Emdur states, “I first grappled with the significance that it carried for me personally and then from there, I became interested in other people’s family photographs taken in front of painted backdrops in prison visiting rooms. I received the first portraits while I began writing letters to pen pals. With only a few in hand, I quickly and without a doubt, knew that I needed to bring these images to a wider audience.”

Emdur’s reading of the backdrops move from the functional—“a place to be photographed with their visitors that is perhaps, more pleasant than a brick or cinder block wall”—to an essential component for maintaining an architecture of power—“The entire premise of photography is to photograph within a frame and to not only choose what to photograph, but to choose what to leave out. Prison visiting room portraits are constructed to intentionally leave out the reality of prison. The aim of my project is not to be an authority on that which is left out, but to rather make the artifice visible. Although the paintings on the backdrops represent freedom, they are vehicles to control the representation of prisons and prisoners.”

Emdur sources limitations not only as the method through which the images are generated, but as the material for the corresponding institutional critique. Thus those limitations placed on photographers by prison administrations, and those implicit in the framing of a photograph, required Emdur to adopt a different, more expanded role than that of the traditional photographer. “My role (within the project)…was to document a system that I did not have physical access to. I did this by asking those with access, to send me their own photographs. This giving up of my own role behind the camera is an important part of the project…Photography points to something and says, hey, look at this. There is a value system built into that. For me, it doesn’t matter if I am collecting photographs from prisoners, giving cameras to high school students, or pulling from Google image searches, it is about the act of pointing and framing.”

A version of the project was published in 2013 by Four Corners including an essay by Emdur, an interview with a prison backdrop artist, reflections about the backdrops from prisoners, and letters from her pen-pal correspondences. Emdur believes the inclusion of these extra materials, “slows the reader down,” and creates a more complex document that allows prisoners to provide their own historical and political context for the project.

Emdur has sent copies of her book to as many participants as she has been allowed to, in fact the softcover design of the book was specifically chosen to allow this to occur (prisons don’t allow hardcover books). She has received feedback from many participants, one writes: ”When I look through the book, I have so many different emotions and feelings. First I got so happy to see the book and myself in it. I realized that is was no longer a project but a reality fulfilled, and the world now can see my face. We are human beings, with feelings, families, and like everyone else. Second, I got so sad. It took me a moment of meditation to understand why I am in a book, because I am in prison, a convicted felon, smiling but not happy. Smiling because I am loved by my loved ones. And I was sad because all of the other inmates in the book and I have so much in common-the reality of the prison industry and how we are beings used to feed this beast. Third, I got happy again because you did something so important, the book! You are showing people the reality of the United States of America, our great nation has its flaws-too many prisoners, people sent to prison like fish in the sea.”

That Prison Landscapes finds a way to get beyond an institution’s lack of transparency, that it creates an incredibly unique and polyvocal reading of history, that it showcases both the potential power and inherent limitations of the photographic medium, that it does these and more, is surely a credit to the project and its participants; however, it certainly does not justify or excuse the institutions that limit artists and journalists, let alone prisoners themselves, from documenting their life behind bars. Institutional limitations placed on photographers have a strange habit of helping to generate some of the most important and powerful published imagery (Ashley Gilbertson’s Bedrooms of the Fallen, images released by Wikileaks from the wars in Iraq/Afghanistan, citizen journalism during the Arab Spring, etc). And, as seen in Prison Landscapes, when photographers are able to find a way through layers of suppression and limitations, it is often what is left out, what the frame has no chance of including, that becomes obvious, visible, and strikingly present.