The Blind Photographer: the remarkable world of sensory photography 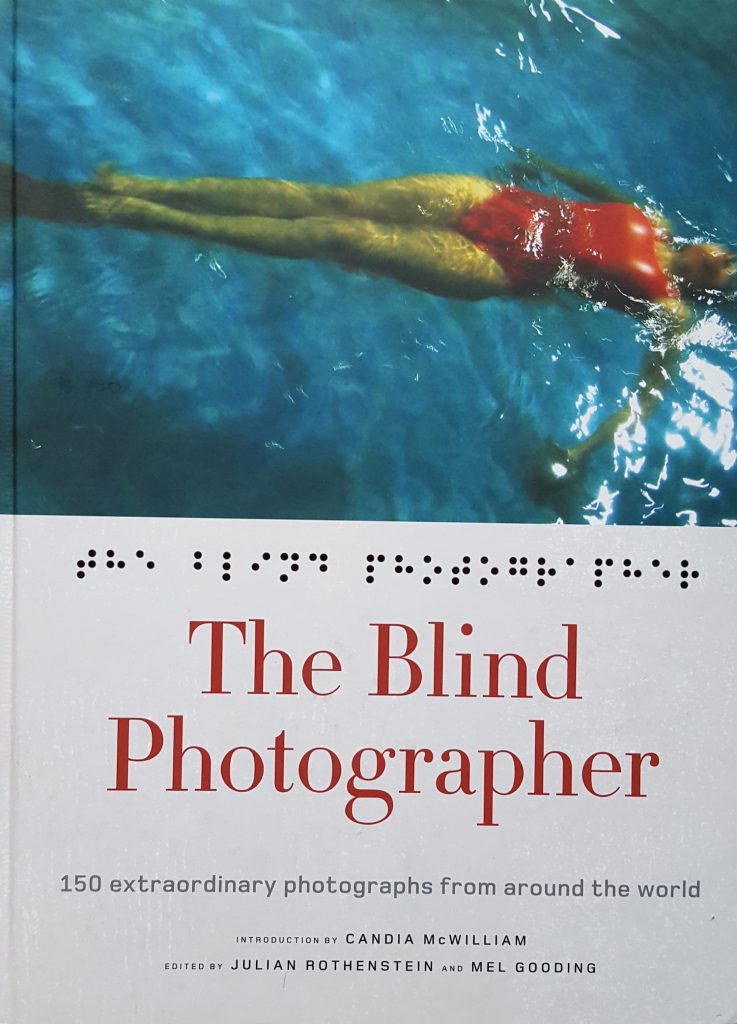 The Blind Photographer, published at the end of last year by Redstone Press, is a photography book that challenges our conception of what it means to see. Showcasing the work of more than fifty blind or partially sighted photographers from around the world, it celebrates the thriving and counter-intuitive world of sensory photography[1] in many of its glorious forms. This book and the whole world of sensory photography is a must-explore for image lovers because it pushes us to confront our own visual prejudices and limits as photographers.

Photography by people that can’t see. How does that even work? And quite frankly, why? At the first sensory photography workshop I went to 10 years ago I was not the only one that needed some convincing. Many of the visually impaired participants who had come along were there out of intrigue and incredulity rather than a burning desire to take photographs. It’s like some kind of awkward bad joke to suggest that a blind person take up photography. But what we discovered was that the process of sensory photography opens up new worlds for both sighted and non-sighted alike.

Gina Badenoch, our facilitator and founder of Ojos que Sienten, showed the visually impaired participants how they could take control of the camera and create satisfying images. For those of us who had no experience of blindness, Badenoch, with the help of the visually impaired in the room, pushed us to experience and imagine a non-visual world and to understand how a notion of sensory photography makes better image-makers of us all.

The first thing to acknowledge is that blindness and sight loss comes in many forms. For some this is an obvious thing to say but there is great diversity in blindness. People may be completely blind, partially blind, their sight might be affected in quite specific ways: short or long sightedness, blurring, patchiness, tunnel vision, sensitivity or distorted vision. Some lose their sight due to illness, others because of an accident. Some lose their sight suddenly, others over time, as children or adults. Some know the seeing world whereas others are blind from birth. A person’s individual experience of blindness is central to how and why they use and work with photography.

When we think about the how – the techniques – of sensory photography the answer depends on the preference and styles developed by individual photographers and the degree of their vision or sight loss. There are various methods that can be employed to make the camera usable for those with visual impairments. These include customisations to the camera itself, using a cane to measure distance, using the forehead to balance and direct the camera and working with a sighted collaborator.

Beyond practical measures, the core of sensory photography is about using all the senses, not just sight, to photograph. Visually impaired photographers construct their images out of the other information available to them. While some make photographs in response to the world around them, others have images in their minds that they seek to recreate in a photograph. They employ sound, smell, touch and taste to make their photographs as well as relying on intuition, feeling and collaboration. In The Blind Photographer’s introduction, the temporarily blind novelist Candida McWilliam, argues that the photographers record with ‘felt sight’. The other senses fill in for the loss of vision and imbue the work of non-sighted photographers with a paradoxical mix of textural and transcendent qualities that both ground their images to the physicality of the world while giving them an otherworldly air. Mel Gooding describes each photograph as ‘a record of a sensational encounter’ (2016:X) 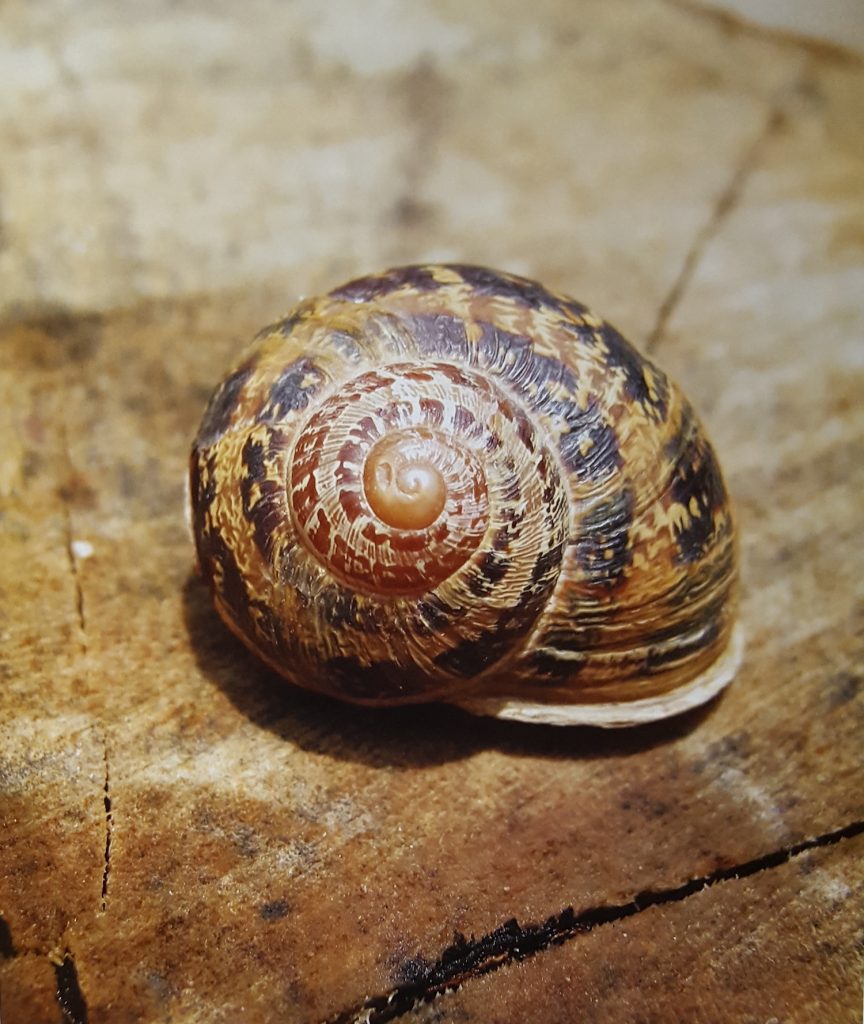 “I use my senses- hearing, touch, taste and smell – when taking pictures. When I touch the camera lens I create an imaginary line from the lens to the object I am taking a picture of; I create the picture in my mind, I feel it and construct it to communicate feelings to the normal-visible world” – Aaron Ramos

The Blind Photographer evokes Azoulay’s notion of a citizenry of photography that is borderless and open. Distinctions are not drawn between professionals, artists and amateurs or enthusiasts. Series of individual images are interspersed with special features on the work of specific photographers, including Gerardo Nigenda, Evgen Bavčar, Alicia Meléndez and Aarón Ramos. Many featured got involved in and pursued their photography through workshops led by dedicated organisations such as the Mexican based Ojos Que Sienten, who collaborated in the production of the book. Two – the writer, Tanvir Bush and the dancer, Mickel Smithen – were part of the Beyond Sight workshops in London where I first discovered sensory photography.

Also featured is the work of photographers involved with the Indian non-profit, Blind With Camera who run an online photo school for the blind and have published their own books See As No Other and In Touch With Pictures, a sensory photo book that combines touch and feel pictures, audio description and braille and large prints for visually impaired readers.

It feels apt that the world of sensory photography, which is all about the infinitely plural ways in which we see, is showcased in this way. There is no one form of “blind” photography or aesthetic that can lay claim to showing the sighted world how the non-sighted see. But inevitably there is some important work that does not feature in the book and that is worth flagging. The touring exhibition, Sight Unseen profiles some of the artists who have pioneered the blind and sensory photography scene and the 2016 documentary, Shot in the Dark profiles three successful blind artists. In addition there is the striking imagery of Seeing With Photography Collective, a New York based group whose work is a collaboration between visually impaired and sighted photographers and has been internationally exhibited, resulted in numerous films and showcased in the Aperture published book, Shooting Blind. They describe a process of photography that is in equal measures highly technical and highly intuitive. Also worth looking at is Seeing Beyond Sight, a youth-focused project in the US. 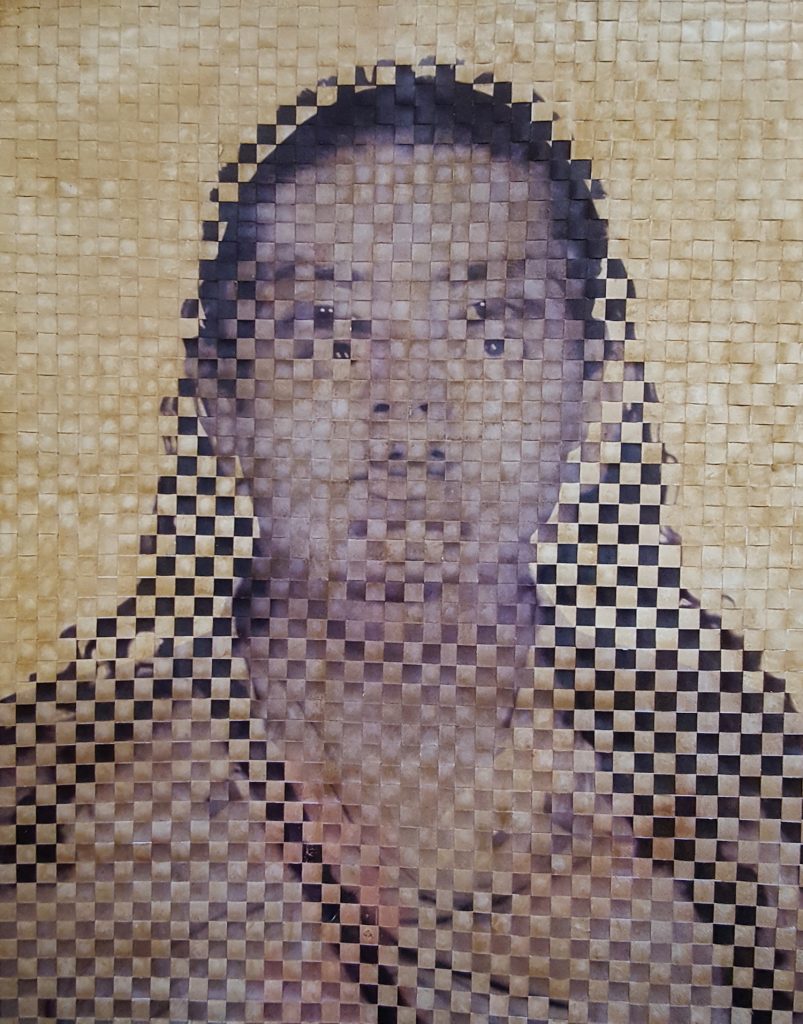 Pedro Miranda, Him and Me, Mexico, 2009 (phototextile)

Returning to the why. Why would a blind person want to take pictures – photographs that they will never be able to see themselves?[2] The photographer Alberto Loranca answers the question by explaining that ‘‘photography is something that allows me to give shape to the things playing, dancing and laughing in my mind. It is to be able to share such wonders with people’ (2016:138). Sharing and communicating is central to many photographers motivation, sighted and non-sighted alike, but in sensory photography it takes on a particular relevance when the photographers often experience their own images through the descriptions given by sighted viewers. The dialogue that the photography creates builds a bridge between the visual and non-visual world, an exchange in understanding as how each other sees. 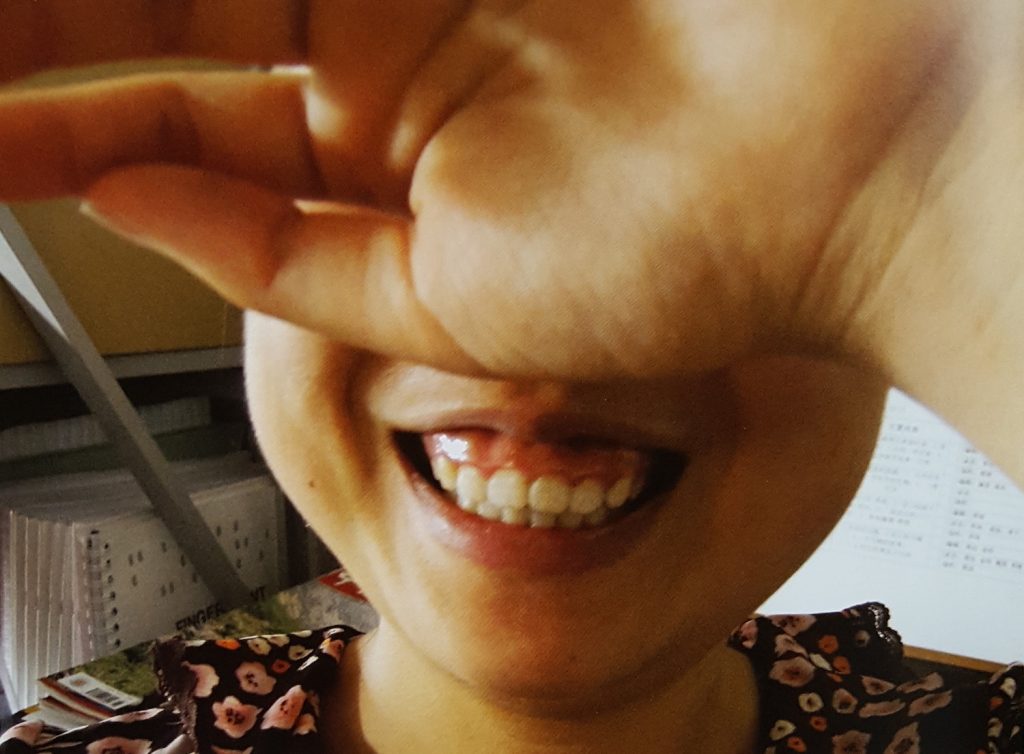 Many blind and visually impaired suffer from social isolation. Employers say it is too difficult, if not impossible, to employ people with sight problems so many are unemployed. A lack of understanding of blindness can lead to prejudice and many people who have sight problems can feel unable to communicate or engage with an increasingly visually-focused world. When we recognise that it is the social stigma of blindness that is the problem not their loss of sight[3] then the purpose of sensory photography projects takes on a new urgency.

For some, photography has helped them come to terms with their loss of sight and the depression, isolation and adjustment that came with that process. Alicia Meléndez says that ‘each click of the camera is an achievement that enhances my self-belief …’. Badenoch emphasises the empowering aspect of photography for visually impaired people who realise they can enjoy something that they thought was impossible. The artist Evgen Bavčar describes it in more radical terms:

“For me, photography does not only represent a medium of artistic expression; it is also a manner of reclaiming one’s right to the image, and the refusal to be another’s passive model”

However, not all are completely sold. Peter White, the blind presenter of BBC Radio 4’s In Touch, remained cynical despite the enthusiasm of his producer when they did a workshop with the Seeing with Photography collective (listen here starts at 6.26 mins).

What is consistently reinforced is that the range of motivations to make pictures is the same for people who cannot see as for those that can. The matter of why is also not only about the benefits it brings for the visually impaired practitioners. All photographers have something to learn from the kind of slow image-making they pursue. McWilliam points out that that those who have lost or are losing their sight often have to take longer to do things – for practical reasons and also because trust needs to be established. She remarks ‘faces cannot be read … swift escape cannot be made… a kind of sonar depending upon intuited locations of all kinds of presence or even threat’ develops (2016:13). The taking of time is manifest in the photos in The Blind Photographer and something I often ponder on. Too much of my own image making has become about grabbed instants and momentary encounters rather than prolonged engagement and dialogue.

The Blind Photographer finishes with a rallying call from the acclaimed Argentine writer Jorge Luis Borges – who progressively lost his sight and was completely blind by the age of 55 – for the blind to transform the circumstances that fate or chance has provided into an instrument that can bring gifts. My encounters with sensory photography have expanded and exploded my own notions of what it means to see. It makes clear the extent to which our vision can blind us. It makes me look at things more carefully, with new eyes. That’s quite a gift.

“I feel just like any other artist and I think people who are blind photographers shouldn’t include their disability as part of their professional title. There is nothing extraordinary about being a blind photographer! Those who think that way should think again as this job is carried out in the dark so, I can’t see how it is supposed to be extraordinary” – Pedro Miranda

Alberto Loranca, “This picture represents a moment of harmony and greatness …”, Mexico, 2011-12. 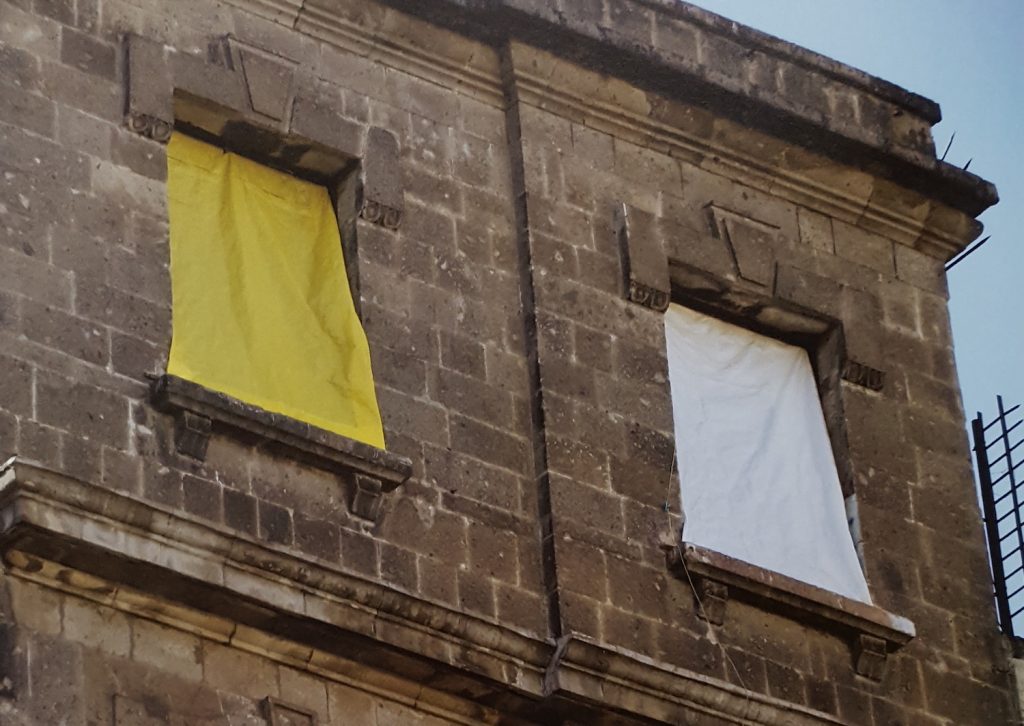