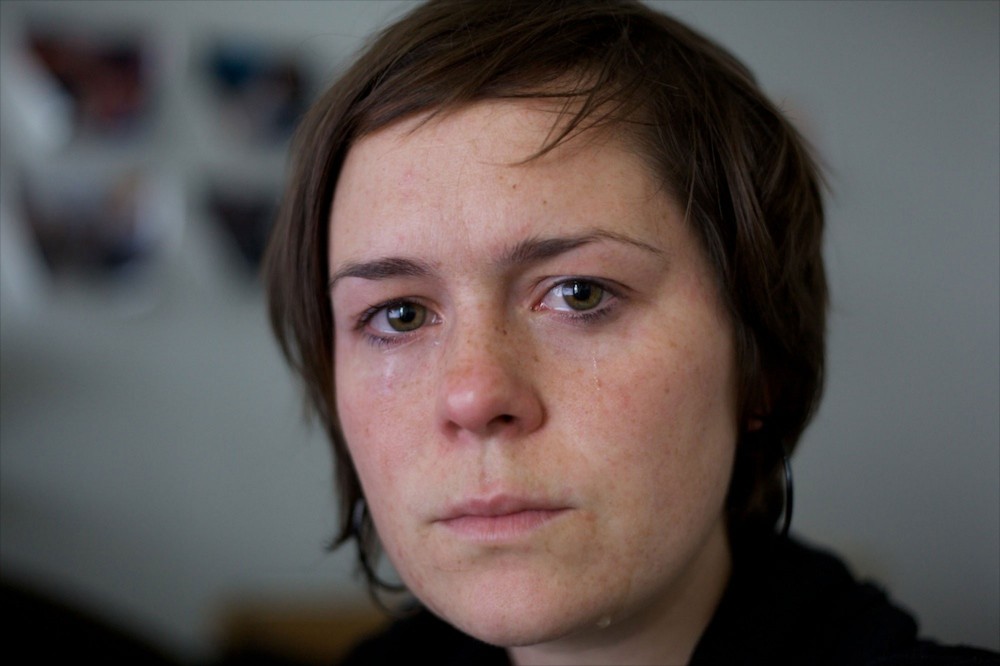 “We’re not a photo family. None of us like having our pictures taken. This was pretty weird way to try changing that.” – Briony Campbell

Briony Campbell’s collaborative work with her dying father David, The Dad Project (2009) 1, is great. I am excited about the way they made it together, and also the implications suggested by the collaborative working methodology; specifically in relation to being deliberate about which audience work is being made for, and subverting the power relationships between photographer and photographed. Visually and conceptually like other projects such as Phil Toledanos Days with my Father (2012) 2, and KayLynn Deveney and Albert Hasting’s The day-to-day life of Albert Hastings (2007) 3, The Dad Project, was an “attempt to say goodbye to my Dad [David] with the help of my camera.” 4 Ruth Rosengarten, a photographer and academic who drew my attention to the work, frames the project perfectly:

The father’s collusion in the project, which combines film footage with still photographs; his declared wish to protect his relatives from the consequences of his death and his fear that they might not be able to look after themselves without him; and his wish to ‘take the opportunity to learn a little bit more’ about his daughter delicately establish the mutuality of the project. The habitual relations of power between the agent of photography and its object are unsettled. The work eases our apprehension about viewing the dead and the dying. […] 5 (my emphasis)

Though this project is beautifully shot––with some of the less deliberately framed images actually intensifying the intimacy and shaky emotional ground that belong in a project centred around disease and death––it is the collaborative partnership that makes it stand out from other projects that invisibilise the photographer, pretending at absence when their presence is at the actual core of the work. Certainly the urge to make something with the person you are losing is deeply embedded for many visual storytellers––even I have tried to make my own collaborative works with my Grandmother Norma 6, but, like Phil Toledano with his father, was not able to invite co-authorship as I wanted. I spoke to Toledano a couple of years ago about Days with my Father, asking him whether he had set out to make the work a collaboration, and he told me that except for very few instances his father’s dementia precluded the kinds of collaborations he had initially envisioned.

Not being able to collaborate doesn’t make the work less worthy––Toldano’s work is a particularly poignant record of their father-son relationship, and the time they spent together over the last three years of his life. But with the Campbell’s we see both the father-daughter relationship, cemented in images that are for both family and the viewing audience, but with the “habitual relations of power between the agent of photography and its object…unsettled.” 7 There are two things of primary interest: firstly, that the work might explicitly be for more than one audience (firstly an insider and, only after their needs are met, then an outsider one), and secondly that collaboration is a methodology radical enough to unsettle the traditional power structures that typically exist between the photographer and the subject of the photograph.

Campbell herself acknowledges the double ontology of this work; her and her father own the first “chapter” of the project (a primary group which I expect also extends to her mother, brother and other family). Acknowledging the hierarchy of the work delegates anyone outside of that partnership to be the secondary audience; “During the first [chapter] it belonged to dad and me. Once it had been exhibited and published the second chapter began, and The Dad Project belonged to whoever saw it.” 8

This doesn’t mean that the work is dismissive of the secondary audience, or of less value to anyone outside the family, but that the primary objective of this work is to help father and daughter navigate this unknown territory towards death, and to know each other better in the process of this collaboration; “…the project motivated us to explore subjects that would’ve been easier to leave alone.” 9 David also speaks to this emphasis on process, namely what he can give his daughter before he can no longer actively participate in her life:

When you first asked me about doing this project, I thought about what it would mean for me to share my feelings with you, and whether it was going to make you feel sad or upset, or whether it was going to make me feel sad or upset. And then I thought more about what it would mean to you, and I thought, this is an opportunity for me to learn a little bit more about you as my daughter, and more about what it will mean for you to be without a dad someday, sooner or later. And the upper-most thing in my mind is to try to be a good dad to you for as long as possible, and to understand what it means to be a good dad to you. 10

In her 2012 book, Artificial Hells 11, art historian and critic Claire Bishop contends that the question of how to communicate the primary experience of participatory art to a secondary, external audience is a pressing and ongoing dilemma, and crucial to the form and substance of socially engaged art making 12

By using people as a medium, participatory art has always had a double ontological status: it is both an event in the world, and at one removed from it. As such, it has the capacity to communicate on two levels—to participants and to spectators—the paradoxes that are repressed in everyday discourse, and to elicit perverse, disturbing, and pleasurable experiences that enlarge our capacity to imagine the world and our relations anew. But to reach the second level requires a mediating third term—an object, image, story, film, even a spectacle—that permits this experience to have a purchase on the public imaginary. 13 (my emphasis)

Bishop offers that this mediating third term, which is necessary to transmit the participatory experience, takes an artist with an eye for painfully telling detail to give a compelling structure and narrative to such a formless and invisible exchange. 14 This need may lead to the invention of new methods of documentation that serve not only to transmit the work, but also contribute to formal innovation within the disciplinary fields in which they are located. 15

This is why Campbell’s chaptering of this work, into process and then coherent, curated outcome is so compelling. In the definitive secondary chapter, creation is ceased at David’s death, and moves to editing, which Briony does alone and grieving, to book-making, exhibition and distribution through media channels. Once public she acknowledges the “life of the project is defined by it’s [sic] audience now.” 16 The audience feedback validates the work as an effective mediating third term; “the on-going reassurance of audience appreciation has coaxed me to feel more comfortable with sharing the most painful imagery.” 17. Even so it is clear that the collaborative process of creation has been the most fulfilling part of the process for her: “I am so grateful to my dad and for giving me a way to keep moving forward with him, and to photography for making it possible.” 18

It is so refreshing that this collaboration explicitly fulfils the emotional needs of the creators, and then, through the distribution process (Briony has published the work in many publications, as well as making a video with the Guardian–– embedded below), acts as a catalyst for people experiencing their own grieving processes (my own response was a kind of jealousy-tinged appreciation––David died of the same cancer as my recently passed grandmother, and this project made me crave a posthumous chance to have made something like this with her). And though I separated them, it is fascinating to see how privileging the primary audience is intrinsically tied to the way in which the collaborative methodology upsets the traditional authorship structures of this kind of documentary-based work.

The traditions of seeking social change and presenting a vision of social realism through documentary photography have typically honoured a definitive structure of authorship; placing the representation of the subject almost entirely at the discretion of the photographer. The photographer as a visionary who is accorded the status of someone endowed with particular sensitivities––viewed as a special kind of seer whose choice of frame lends extra authority and credibility to the picture. 19 And it is this tradition Rosengarten is referring to when she says that in this work, the “habitual relations of power between the agent of photography and its object are unsettled.” 20

Of course there are other projects that subvert the idea of the photographer as ‘special seer,’ and some that disrupt the visual language and other storytelling and distribution structures in far more radical ways. But the beauty of this partnership is that it lays bare the difficulty of collaborative making right next to the benefit. Briony is open about how challenging she found working in this way, within the intimacy of her own experience, detailing how the project is dependant on the participation of David, and the timely blessing of her Mother: “… as we walked out of the room, having said our final goodbye’s to Dad’s dead body, Mum asked me ‘Have you got all the photos you want? Do you want us to take one of you with Dad?’” 21

I usually lean towards photo-based collaborations that address the inherent power imbalances of authorship in more significant ways, particularly those that focus on working with those groups who are typically socially marginalised––like Anthony Luvera working with people who are homeless in the United Kingdom 22, or Eric Gottesman’s long-term project with a group of Ethiopian children orphaned by AIDS 23––because these restructures of documentary-based work are actually more radical given the disparity of co-author agency. But this project by the Campbell’s is delightful, and unexpectedly subversive even though Briony is ultimately in charge of the visual language, and the way the collaboration is presented to the secondary audience (reverting to a more traditional structure of authorship). The duality of making that is explicitly present in this project leads me to think (perhaps wishfully) that the way Briony has realised the work would be exactly how David would have wanted it as well.

‘What’s life all about? Tough decisions’ (whenever I sought Dad’s advice on a problem this simplistic phrase would precede the slow and thorough discussion that followed; an exploration of the relevant factors, each one considered from all possible perspectives). Recently I’ve made a lot of them. Without my dad, but very much with him. 24 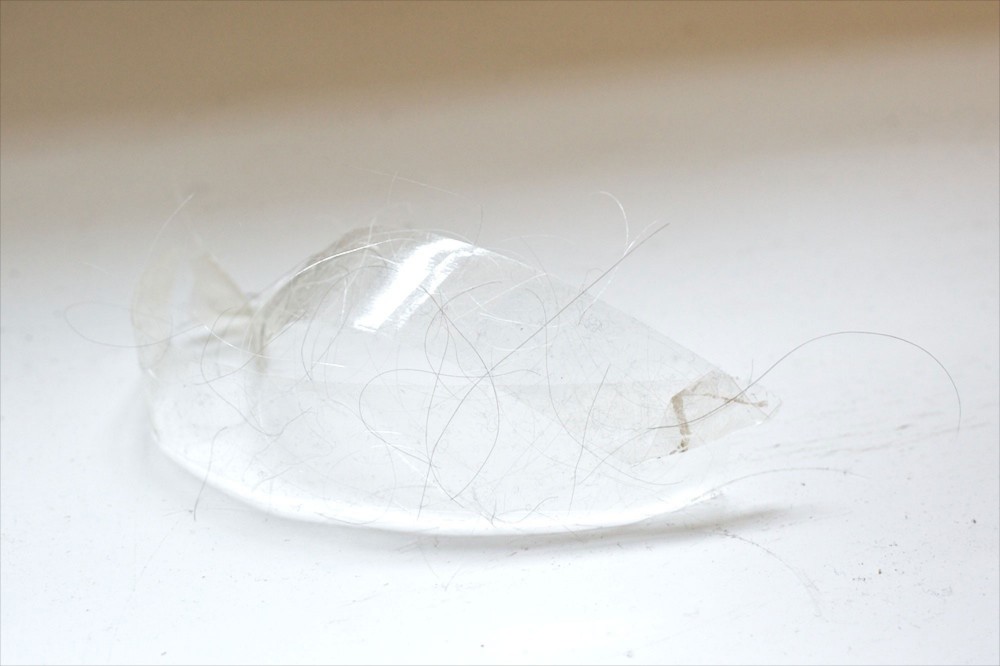 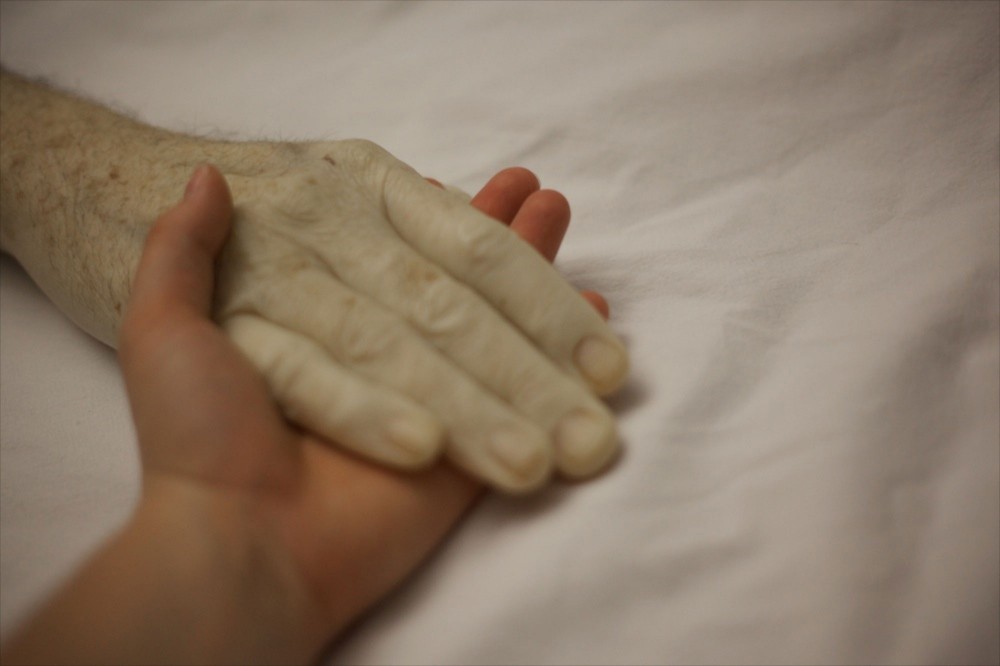 When we said goodnight on his last lucid day, he said; ‘Think about what we should shoot tomorrow for the project’. By tomorrow his shine was gone and just his shape remained – His unconscious contribution. © Briony Campbell