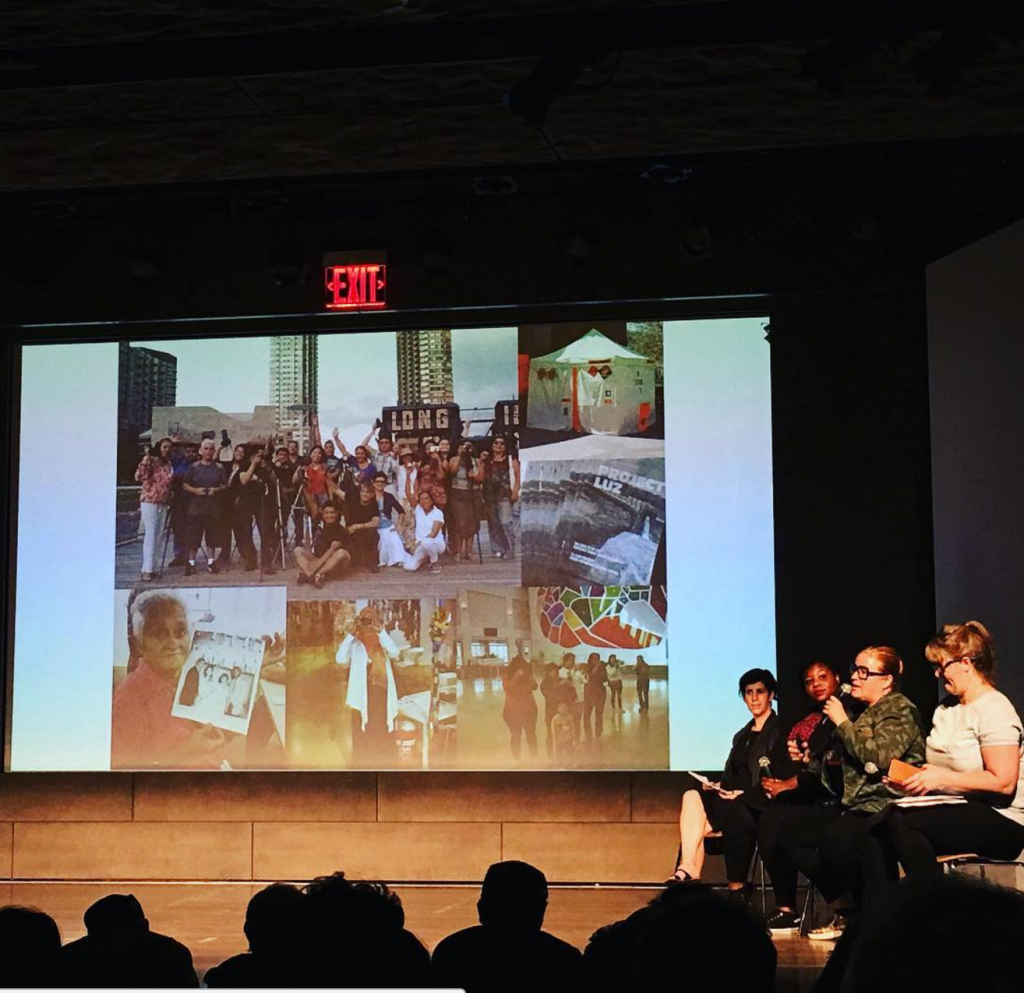 On June 8, I hosted a panel for the Magnum Foundation’s Photography Expanded symposium on Collaborative Approaches to Creative Documentary Practice. I provided an introduction to position some of the concerns of socially engaged photographic practice, the prepared form of which is included below, and after each panelist presented their work, I moderated a discussion on listening as a way to shape the form of projects with:

Sol Aramendi, who will share her apps for power project. Jornaler@ App links the struggle for immigrant workers’ rights to the concept of community accountability. The smartphone-based app will fight wage theft and restore power to the worker by allowing users to safely share their experiences and report abusive and neglectful employers, effectively inserting transparency into a previously exploitative and alienating system.and Project Luz and will reflect on participation and listening in her work.

Nina Robinson, who will speak about her work at the William Hodson Senior Center —accesses and releasing issues and memories and imagination, healing process through archival images, portraiture, and picture making.

And, Zohar Kfir, who will speak about the Testimony project which launches by telling the stories of five survivors of sexual assault and their journey to healing. “Beyond just a film, Testimony will serve as a platform to allow the public to witness those who have been silenced and bring awareness to an epidemic that affects us all – our friends, our family, our children.” 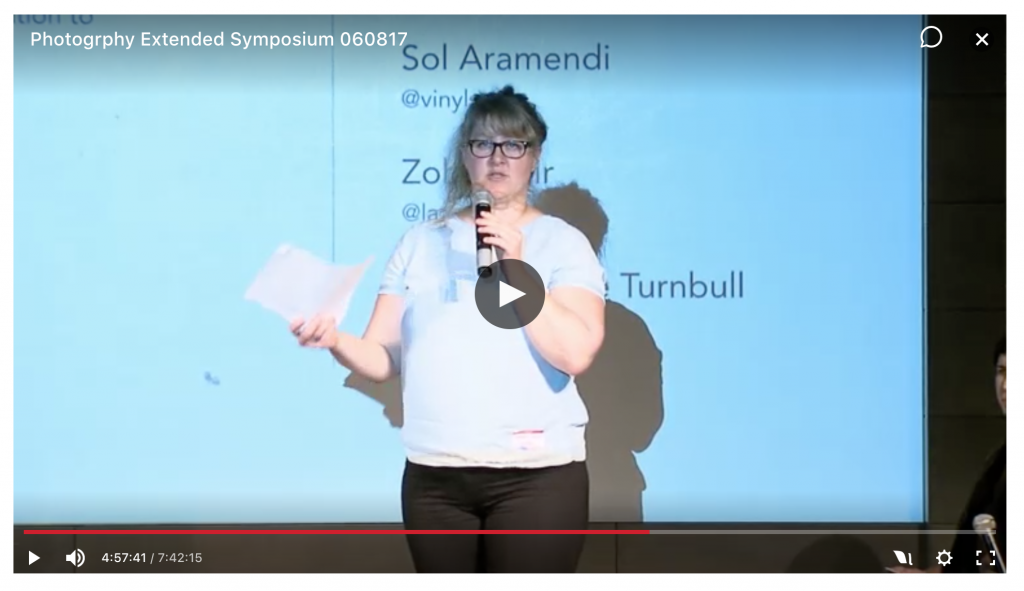 The video of the panel will be uploaded soon. For now you can find it here, starting at 4:54:30

Hi, my name is Gemma-Rose Turnbull. I have a background in documentary photography and photojournalism, and my photographic practice is now solely collaborative. I am a Senior Lecturer in Photography at Coventry University in the UK, where I am currently writing an MA in Photography and Collaboration with my colleague Anthony Luvera, due to be launched in January 2018. I am completing a PhD looking at collaborative photographic practices at The University of Queensland in Australia, and I also run the website Photography as a Social Practice with my colleagues Eliza Gregory and Mark Strandquist.

Collaboration and participation are not new concepts nor methodologies within the history of documentary-based photography[i]. Indeed, by the nature of the author-subject relationship, in many ways it can be read as an endeavour which requires participation[ii][iii]. However, using approaches which explicitly relocate the ‘subject’ of the photographic gaze to an active maker in the production of photographic works has become increasingly popular over the last few years. This relocation, which forefronts the relational component of storytelling, introduces new ways of making, but also requires new frameworks to understand how to create meaningful practice.

One of the driving impulses which seems to propel the rising popularity of collaborative ways of photographic making is unsettling “… the habitual relations of power between the agent of photography and its object”[iv], disrupting ideas of representing and represented, and these methodologies are often utilised in working with those individuals and communities who might traditionally be the subject/s of photographic works most commonly associated with documentary practice, with its strong ties to issues of social justice, and Social Realism. In my own collaborative practices, for example, I have worked with street-based sex workers, elderly people who have experienced abuse, and children from diverse socio-economic backgrounds. If we visualize the continuum of a project running roughly from conception, through financing, establishment of critical-creative parameters, production, curation, exhibition, through to archiving, it is possible to imagine a constellation of possibilities[v] for the radicalisation of authorship within these sites––exciting for a practice founded on the idea of the photographer as special seer[vi].

But even with a project continuum which may emulate that of traditional making, a challenge with this kind of practice is a tendency for photographer-authors to fail to take into account the implications of embracing alternative forms of authorship within the structures of photography. This may lead to the terms being enacted in a performative way––where collaboration is not implemented in ways that robustly defend the agency of their collaborators, or acknowledge the insider knowledge they bring to the formation of the work. This is not necessarily deliberately disingenuous, but may be reflective of a lack of understanding of the broader implications inherent in a practice that is labeled such. While socially engaged practices are at the forefront of contemporary art dialogue, there are very few photography-specific guides to support the translation of this impulse to transform authorship, into action which reflects the intentionality of practice. And, of course, there is a natural tension which occurs when this practice becomes the preserve of multiplicity––the construct of photography heroises the singular auteur[vii][viii], and it is both conceptually and pragmatically confronting to reposition ownership.

One of the things my colleagues and I have been working towards over the last few years is identifying some of the ways in which these kinds of practices may be understood better, and expanded by those people utilising them. We have consistently looked towards the contemporary discourse and developments of socially engaged art, keeping our focus on the specific concerns of photography. This has included attempts to define ways in which collaborative photographic practices can be diverse (rather than singularly enacted in the making-stage), illustrated here with Eliza Gregory’s Spectra of Collaboration, which we could consider a starting point to encourage practitioners to diversify approaches, as well as looking to articulate key questions which should be asked of the practice––you can see some of Emily Fitzgerald’s listed here.

Eliza Gregory‘s Spectra of Collaboration, which you can find here. 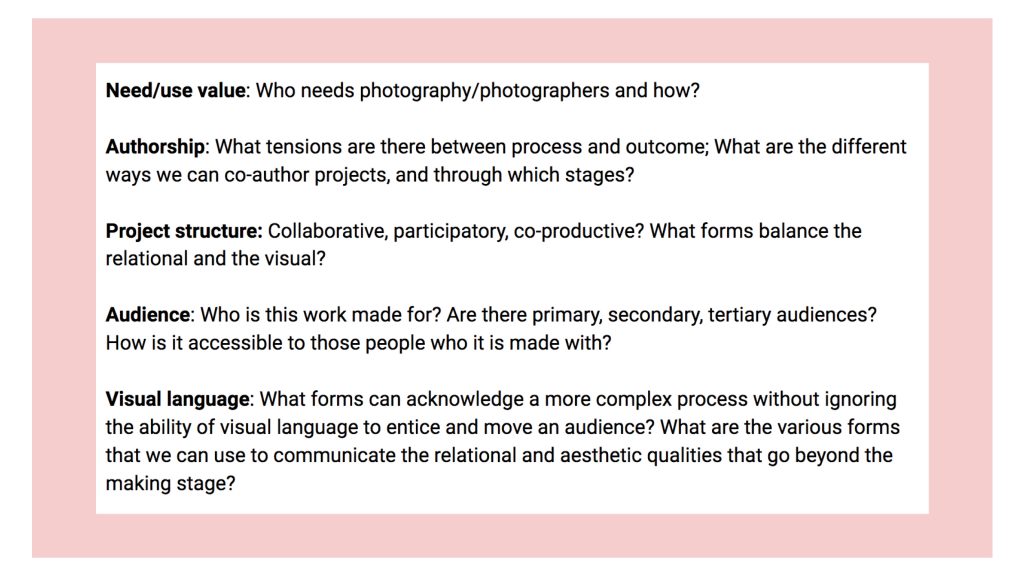 A list of questions for socially engaged photographic practices, written by Emily Fitzgerald and Gemma-Rose Turnbull for Intersection: A Workshop on Socially Engaged Photography at Blue Sky Gallery, Portland, OR, 2015.

Arguably, the most important question is the first one: “Who needs photography/photographers and how?” Our research has revealed how crucial it is for people who make work here to examine their motivations. Sharita Towne frames it well: “How do you take pictures of somebody in a way that brings them to the table instead of putting them on the menu?”[ix] It is clear that the answer is both asking in the first instance, as well as listening intently, even when that listening may reveal outcomes that force the project into forms as yet unrecognisable within the documentary genre.

This panel is structured around this idea that listening is an active act which might set conditions for meaningful, even radical, collaboration. Today we are going to hear from three practitioners who move beyond listening for storytelling purposes, and towards listening as a project component which discerns outcome and form––Sol Aramendi, Nina Robinson, and Zohar Kfir. After these practitioners have presented their projects, we will have a discussion about the role listening plays in these diverse collaborations: