“There is no calculus to determine the most effective way to show horror. But certainly it would be important to investigate the processes that engender it, and not just the shocking results, no matter how visual. It would be also helpful to begin to try and trace alternatives to such catastrophes, and to provide examples of even partial resolutions. Then show those who must endure the traumas of war once the spectacle has faded—the physically and psychologically wounded, orphans, widows, parents left without children—and remember them in the years to come. And, finally, begin contemplating the best of the “photography of peace,” and not only that of war—the beauties of ceasefires, and of healing, and of some of the horrors that were prevented from happening.” – Fred Ritchin

Ritchin doesn’t write exclusively about collaborative photographic practices per se (his focus is predominantly focused on the world of photojournalism), but his 2013 book “Bending The Frame; Photojournalism, Documentary and The Citizen” was easily one of my favourite reads of last year. 1 In fact, my first written submission for my PhD candidature (20,000 hard won words) was framed by this quote from the book:

“What are the possible approaches, including those emerging and those marginalized, that may establish stronger, more thoughtful, more straightforward connections with the actual and essential? Which kinds of image-based strategies might best engage readers, and which might manage to respect the rights, and the agency, of those depicted? How does today’s image-maker create meaningful media?”

Today’s article, “Why Violent News Images Matter,” 2 published on Time’s LightBox is not about photo-based social practice, but what I see when I read (from the first quote above) “Then show those who must endure the traumas of war once the spectacle has faded,” ties into his call for “more meaningful media.” When more and more documentary photographers and photojournalists are turning towards collaborative and participatory methodologies 3, choosing to co-author works with the same people they have previously photographed as ‘subjects,’ there some sense of dismissing the role of the accomplished storyteller for a less visually polished model (I disagree those things are exclusive).

This perhaps comes particularly from Photojournalists and Documentary Photographers themselves. I got into a sort of passionate argument with two colleagues at a party on Friday night, who kept insisting, with very shocked faces, that ‘the image is the ultimate goal.’ In my arguments for process being allowed equal importance the photographing of war and news are often trotted out as examples to contradict my idealist goals. And I also think they’re an important part of the contemporary visual landscape. Absolutely. As images, for us the public, and for the photographers making them. And I also think that those times and places are not for collaborative image making (let’s speak about citizen journalism another time). But when we revisit these scenes of trauma (after the spectacle) that I think we have the capacity to address some of the more complex and nuanced situational politics we are not able to when ‘capturing a moment.’

Ritchin evokes Jennifer Karady’s work when he asks this, his most pertinent question: “Why, for example, is there no similar clamor to be confronted with the images of civilians and soldiers who, years later, must contend with their own chronic injuries that resulted from previous conflicts?” 4. Karady works with American veterans returning from the wars in Iraq and Afghanistan to create staged narrative photographs that depict their individual stories and address their difficulties in adjusting to civilian life. 5

After an extensive interview process with the veteran and their immediate family, Karady collaborates with the veteran to restage a chosen moment from war within the safe space of their everyday environment (Figure 1, 1a) (and in these images the veteran is often surrounded by family and friends (Figure 1b, 1c)). The process of making the photograph is intended to be helpful for the veteran, and Karady borrows from the concept of cognitive behavioral therapy. Describing the process as equal parts journalism and psychotherapy. “This thing is replaying visually in the person’s head, and we really have no idea what is going on,” she said. “But the idea, conceptually, of taking that moment and recontextualizing and placing it in the civilian world, is based on a therapeutic model.” 6

Dr. Jonathan Sherin, the chief of mental health for the West Los Angeles V.A. Medical Cente, informally advises Karady. He likens the photos to “exposure therapy,” in which veterans are asked to revisit painful experiences, and says “Working with her, going through the staging, spending a lot of time reliving and remembering has been, for them, very helpful.” 7

Each photograph takes approximately a month to produce and involves several extensive interviews (recorded), collaborative conceptualization, location scouting, producing a sketch, discussion/approval from veteran, propping, makeup, costuming, rehearsal of physical action, training local assistants, set construction, casting extras, artificial lighting and the photo shoot. The process of making the photograph culminates in a highly choreographed installation/event. And, although highly choreographed, Karady does not digitally manipulate the images, in order to ensure the “truthfulness of the staged moment and the authenticity of the veteran subject’s participation.” 8 The point of this being, I would hazard, to ensure that the particpant is fully aware of the representation they are collaborating in (with no post-production changing or manipulating the image they worked together on). 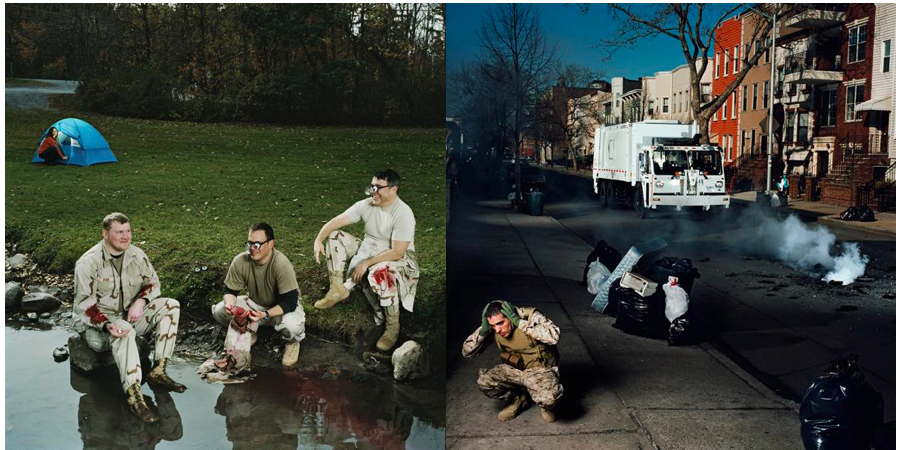 This is a really exciting documentary-based collaboration, and presents a more radical version of participation. Karady seems to view the process of creating an image as a social performance that has the potential to transform the photographer, the subject, and the secondary audience. 9.

There is room for all of these approaches, of course there is, and arguing for an increased focus on the social aesthetic of the image (the social interactions that led to its production, exhibition, distribution) 10, does not discount the role of the Photojournalist. And, of course, the distribution of Karady’s images need to be debated as rigorously as those graphic news photographers; where, and for what benefit (to participants, and to any viewer external to the process of making)? Both spectacle and post-spectacle image making still point to that pivotal question that we should all  be asking ourselves, regardless of what approach we take––Why Images Matter?